My friend have got one USB stick infected with malware, at least that’s what one AntiVirus product reported about it. But strange thing happen, it seemed that the detected file was not present on this USB key. Not only the detected file, but also all of the user data was missing. Only one .lnk file was present in the root of the filesystem. So, this is point where our investigation begins…

If we look into the AMUNET (8GB).lnk file, we can see that it runs the file from this USB stick. (Actually, it starts the rundll.32.exe via the cmd.exe).

But the question is, where is this file with this extra long name hidden? And the answer is: it is placed in the hidden directory with nonprintable name (”\xC2\xA0”), as we can see in the next picture (there are also all of the missing user data).

The nonprintable directory name is the reason, why some tools have problems with displaying it, and/or don’t work with its filepath correctly. As we can see from the output of file or exiftool, the sample is Win32 DLL with filesize aprox 6.9MB. It is detected as malicious by 44 antiviruses on VirusTotal, in most cases as a variant of Zusy or Bundpil, see output from vtTool.py:

Also the Intezer identifies this sample as Tinba (another name for Zusy malware). Intezer is platform for analyzing the code reuse between the malware families, in many cases it can be very useful for identification of the unknown samples. As Intezer says about itself:

Intezer Analyze™ dissects binary code into thousands of small code fragments (genes), then compares them to a massive database that contains genes from malware and legitimate software, effectively providing a full DNA mapping of each executable. 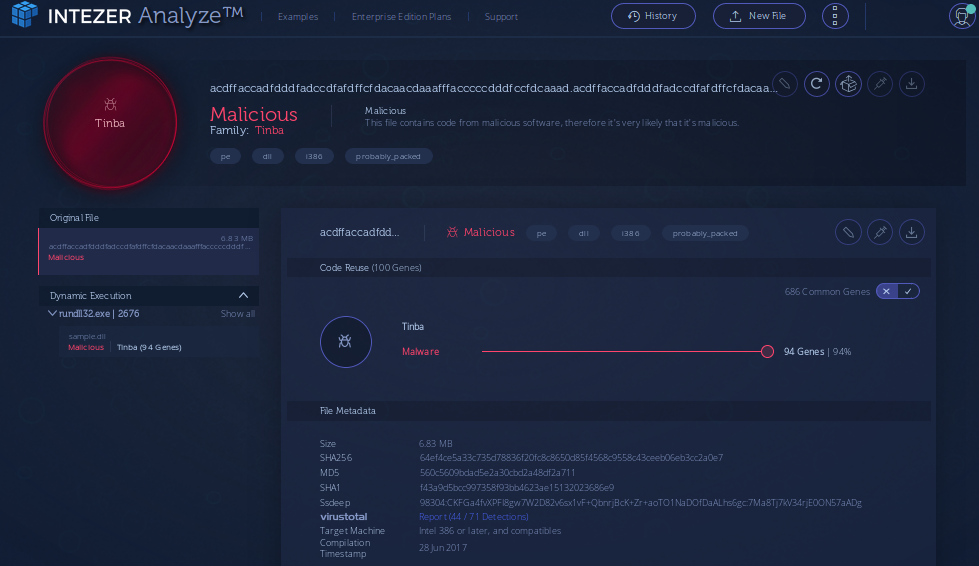 Unfortunatelly, in this case it turns out that our sample is not the variant of Zusy or Tinba (Tiny banker trojan), which is usually much smaller then 6.9 MB. The second most frequent detection as a worm called bundpil seems more legit. Moreover, also the description from the ESET mentions the .lnk files with the names exactly like in this case:

The worm creates the following files:

Next step is to proceed with behavioral analysis. We can try to run our sample at Any.Run interactive sandbox using the command extracted from .lnk file before (cmd.exe and rundll32.exe):

This execution leads to the application crash, with exception at offset 0x00001b6c in our sample: 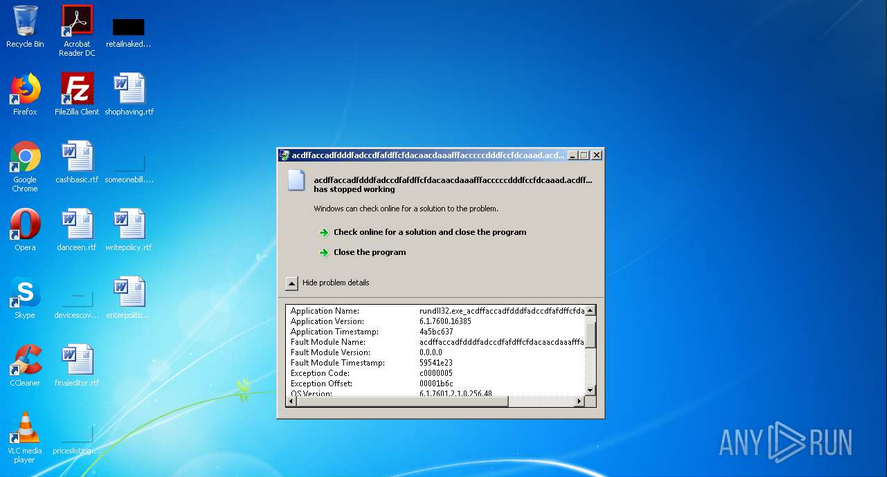 Now, we will get more info about intended behavior using Ida disassembler. We can look at the exception offset and also we can try to find references to the filenames listed above. One tip for Ida: after loading the sample don’t forget to use FLIRT signatures, in this case it identifies more then 600 library functions (because static linking of C Runtime library) and only small portion of the code still remain to analyze:

Sample tries to load the first file as library in new thread, so if this file exists somewhere in DLL search path, it will be loaded and its DllEntryPoint will be executed.

There are also a lot of junk code, for example the third filename in the list above is just for the obfucsation. If this file exists, its copy will be created with another messy filename: 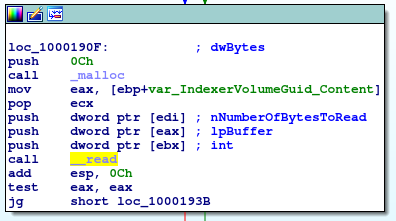 decrypting it (by the way, this is the code where application crash was occured during the execution at Any.Run, because no IndexerVolumeGuid was present and the sample tried to decrypt uninitialized memory from the heap): 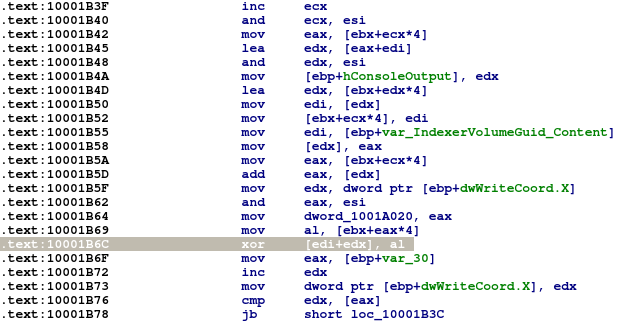 and finally, call the decrypted code:

The analysed sample was the worm Bundpil, which is able to spread via removable media. It can hide files inside the directory with nonprintable name and using the .lnk file in the root of the removable media it starts the hidden DLL loader of main payload, which is placed as the file IndexerVolumeGuid in the hidden directory, too.

Unfortunatelly, in my case, I did not make a full copy (or binary image) of the infected USB stick, because lack of time, I only made a copy of the .lnk file and DLL loader, which I found after very quick analysis. So, this is the reason, why I did not present also detailed analysis of the decrypted content of the IndexerVolumeGuid.